Here is the list of new publications released in December

December, 2016 - The IPC-IG is pleased to present you the new issue of its flagship publication, the Policy in Focus magazine, titled “A new urban paradigm: pathways to sustainable development”. It features 13 inspiring articles, delving into the challenges and opportunities presented by the adoption of the New Urban Agenda at the United Nations Conference on Housing and Sustainable Urban Development (Habitat III), held in October in Quito, Ecuador.

This issue was produced in partnership with UN Habitat, and sheds light on new ways of thinking about our world, and contributes to a new body of knowledge to better equip policymakers and academics to face the challenges and seize the opportunities of an era of shifting global systems and an emerging new urban paradigm. 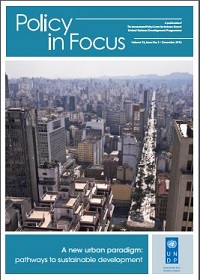 We also present you a list of three must-read Working Papers that address family farming worldwide. First, the Working Paper titled “Family Farming in the Near East and North Africa”, authored by Ray Bush (University of Leeds), begins by exploring the meaning of the term ‘family farming’, and how appropriate it is in the NENA (Near East and North Africa) region, and continues by exploring more generally the role of farming and agriculture in the broader political economy of the region, among other issues. It also highlights a preoccupation among policymakers in the region, and also elsewhere, with a very restrictive definition of food security.

In the Working Paper “Family Farms of North America”, John Ikerd (University of Missouri-Columbia) presents the historical role and evolution of family farming as well as challenges faced by family farmers in the region.

Additionally, in the Working Paper titled “Family farming in Europe and Central Asia: history, characteristics, threats and potentials”, Jan Douwe van der Ploeg (Wageningen University and Research Centre, the Netherlands) addresses three basic questions: What does the family farm mean for the actors involved in it? Second, why, how and under what conditions is family farming important to society as a whole? And third, will family farming be relevant, attractive and important in the future of Europe and Central Asia?

Moving on to the subject of education, in the Policy Research Brief “The Brazilian Adult Literacy Programme: a brief overview and possible areas of research”, Claudia Tufani (IPC-IG) briefly describes the programme and provides a summary of its characteristics in Maceio, capital of the Brazilian state of Alagoas. The study aims at both making information about the programme more widely available and raising relevant questions about the programme’s effectiveness and economic and social impacts, with the goal of encouraging more research into it. This article is available in English and Portuguese.

The One Pager "Social protection and the empowerment of rural women in Africa", by Raquel Tebaldi and Mariana Hoffmann (IPC-IG), and Maja Gavrilovic (Food and Agriculture Organization of the United Nations -FAO), summarises the main points of discussion of the eponymous webinar, held last June, which was the second of the webinar series titled ‘Gender-Sensitive Social Protection", a joint initiative by the IPC-IG and FAO. This webinar explored the potential of social protection to contribute to the empowerment of rural women, focusing on the African region. This study is available in English, French, and Portuguese, and was prepared as part of the project "Brazil & Africa: Fighting Poverty and Empowering Women via South-South Cooperation", financed by the United Kingdom Department for International Development (DFID).

In the One Pager "Disability and social protection in Mongolia", Ludovico Carraro (Oxford Policy Management -OPM) provides a well-rounded overview of Mongolia’s social protection system for persons with disabilities (PWD), which has both social insurance and social assistance elements.

The One Pager “Can Low-Income Countries Adopt Counter-Cyclical Policies?”, by Degol Hailu, (IPC-IG), and John Weeks (SOAS, University of London), is now available in Arabic. The study was previously published in English, Chinese, French, Spanish, and Portuguese.

The IPC-IG believes in the power of knowledge to change people's lives and the world. Indeed, part of the Centre’smission is to produce evidence-based policy research, delivered through several different publication formats, ranging from the popular One Pagers to its flagship magazine, Policy in Focus, to the more technical Working Papers and Policy Research Briefs. 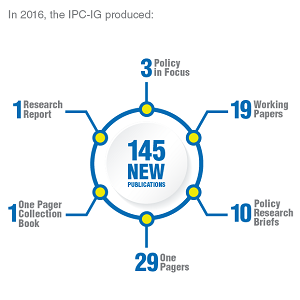 IPC-IG publications are originally released in English but translated versions are also produced in Spanish, French, Portuguese, Chinese, Arabic, Italian, Turkish and Bahasa. In 2016, the Centre made available online a total of 145 new publications completely for free.