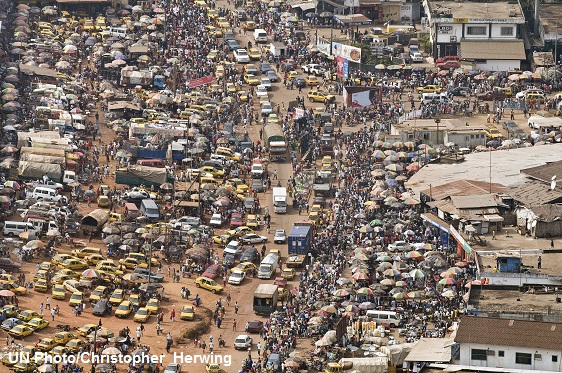 January 2017 - We live in an urban century. Today, 54.5 per cent of the world's population lives in urban areas, according to the United Nations. By 2050, the urban population is expected to reach 70 per cent of the total global population. Addressing this important theme of the global development agenda, the IPC-IG launched a new issue of its flagship publication, the Policy in Focus (PIF) magazine, titled “A new urban paradigm: pathways to sustainable development”. It features 13 inspiring articles, which delve into the challenges and opportunities presented by the adoption of the New Urban Agenda at the United Nations Conference on Housing and Sustainable Urban Development (Habitat III), held in Quito, Ecuador, in October 2016.

This special edition contributes to a growing body of evidence-based knowledge to better equip policymakers and academics to face the challenges and seize the opportunities of an era of shifting global systems and an emerging urban paradigm. In the editorial, Dr. Joan Clos, Secretary-General of Habitat III and Executive Director of the United Nations Human Settlements Programme (UN-Habitat), highlights the importance of the New Urban Agenda in helping countries tackle the current urbanisation challenges. 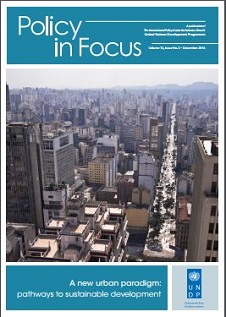 According to UN-Habitat, the New Urban Agenda is an "action-oriented document which will set global standards of achievement in sustainable urban development, rethinking the way we build, manage, and live in cities through drawing together cooperation with committed partners, relevant stakeholders, and urban actors at all levels of government as well as the private sector".

Starting with the article "Inequality and patterns of urban growth", Dr. Ricky Burdett, professor of Urban Studies at the London School of Economics and Political Science (LSE), and director of LSE Cities and the Urban Age Programme, highlights that many urban projects of the last decades have contributed to a physical reinforcement of inequality. Therefore, the urban question revolves around issues of inclusion and exclusion.

Dr. Benjamin Barber, founder of the Global Parliament of Mayors, wrote an article calling on the responsibilities and rights of cities—and their mayors—to act as key players of this new urban century. In the same vein, Dr. Robert Muggah, Research Director at and co-founder of the Igarapé Institute, analyses the factors that make cities fragile and vulnerable, highlighting that the future of global security and development will be determined in urban centres.  In his article, Dr. Richard Florida, Director of Cities at the Martin Prosperity Institute at the University of Toronto’s Rotman School of Management, and University Professor at the University of Toronto, reflects on the role of cities as economic engines of global progress and growth.

Urban planning innovation in Africa is the core theme of the article penned by Dr. Nancy Odendaal, associate professor of the School of Architecture, Planning and Geomatics at the University of Cape Town, South Africa. Still considering the challenges of urbanisation in the African continent, Dr Edgar Pieterse, Director of the African Centre for Cities, provides a snapshot of the informal nature of urbanism in most of sub-Saharan Africa, and discusses related topics such as implications of the convergence of slum urbanism, an expanding youthful population and labour force, marginalisation in an interconnected economic system, among others.

With the increasing urbanisation and globalisation of the last decades, mobility has become another equally priority topic. Dr. Susan Zielinski and Komal Anand Doshi, Managing Director and Research Associate, respectively, at the Sustainable Mobility & Accessibility Research & Transformation (SMART) of the University of Michigan, describe aspects of the shifting landscape of mobility in the Global South and some related innovative business, integration and policy models. 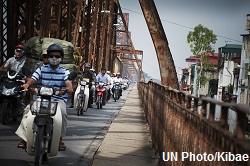 The challenges and opportunities of metropolitan areas in light of the New Urban Agenda are the focus of the article authored by Felipe de Souza and Jean-Yves Barcelo, UN Habitat's Consultant and Inter-Regional Advisor, respectively. From a more regional perspective, Dr. Alfonso Iracheta, Professor of Urban Affairs and Regional Planning at El Colegio Mexiquense, explains the urban expansion challenges facing Mexico, where almost 60 per cent of the population live in metropolitan areas. This number is expected to grow to around 135 million people by 2030. Dr. Flavia do Amaral, Executive Director of the Municipal Development Agency of the Belo Horizonte Metropolitan Area, contributes with an article detailing examples of governance and social participation in the Belo Horizonte metropolitan region, in the state of Minas Gerais, Brazil.

Bringing this special edition to a close, Dr. Marc Weiss, Chairman and CEO at Global Urban Development, and Dr. Luis Felipe Nascimento, from the Federal University of Rio Grande do Sul, present the case of the capital of the Brazilian state of Rio Grande do Sul—Porto Alegre—and its Sustainable Innovation Zone (Zona de Inovação Sustentável de Porto Alegre—ZISPOA), a project that aims to make the city the most sustainable and innovative place in Latin America by 2030.