Study presents a proposal for the unification of social protection benefits for children, youth and those vulnerable to poverty

The aim is to create a universal benefit for children and adolescents, eliminating duplications and coverage gaps that leave 17 million children without any type of social benefit 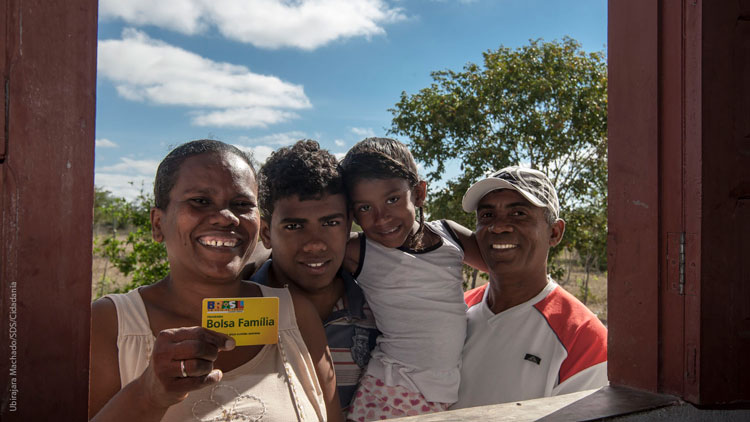 Brasília, 18 March—Despite the improvements brought by conditional cash transfer programmes such as Bolsa Família, which aim to fight poverty and support childhood, there is still much fragmentation among them. Around 0.8 per cent of Brazil’s gross domestic product (GDP) is destined to these types of programmes.

Researchers Sergei Soares, Letícia Bartholo and Rafael Guerreiro Osorio, of the International Policy Centre for Inclusive Growth (IPC-IG) and the Institute for Applied Economic Research (Ipea) carried out a study and developed a new proposal that can distribute the benefits in a broader and more equitable way to children and people vulnerable to poverty.

The study, titled “A proposal for the unification of social protection benefits for children, youth and those vulnerable to poverty”, proposes the creation of a universal child benefit and a targeted extreme poverty grant, by restructuring the Bolsa Família, Abono Salarial (Wage Allowance) and Salário-Família programmes, as well as the child income tax deductions—which together add up to BRL52 billion (about USD15 billion), or 0.8 per cent of Brazil’s GDP (in 2016). 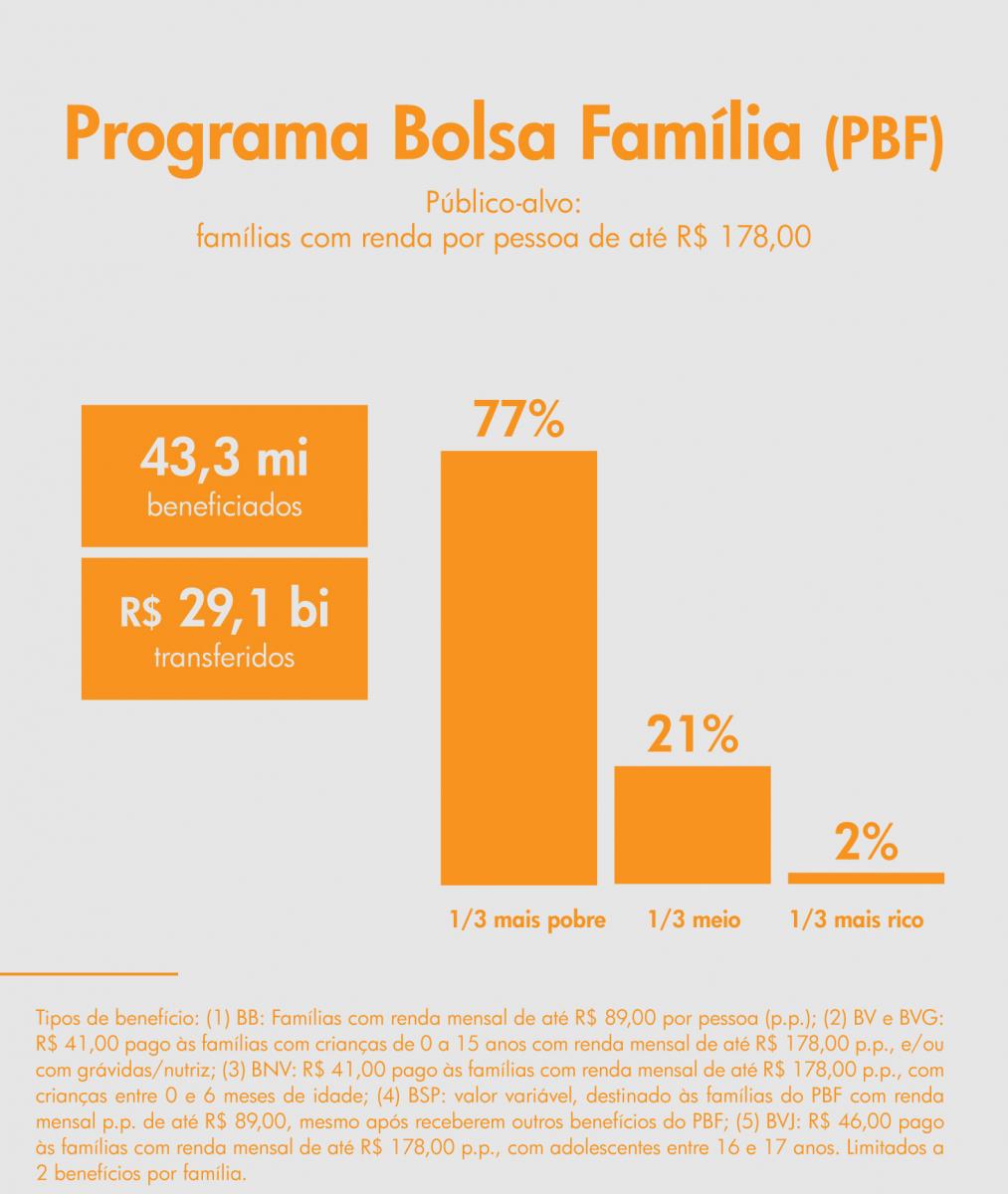 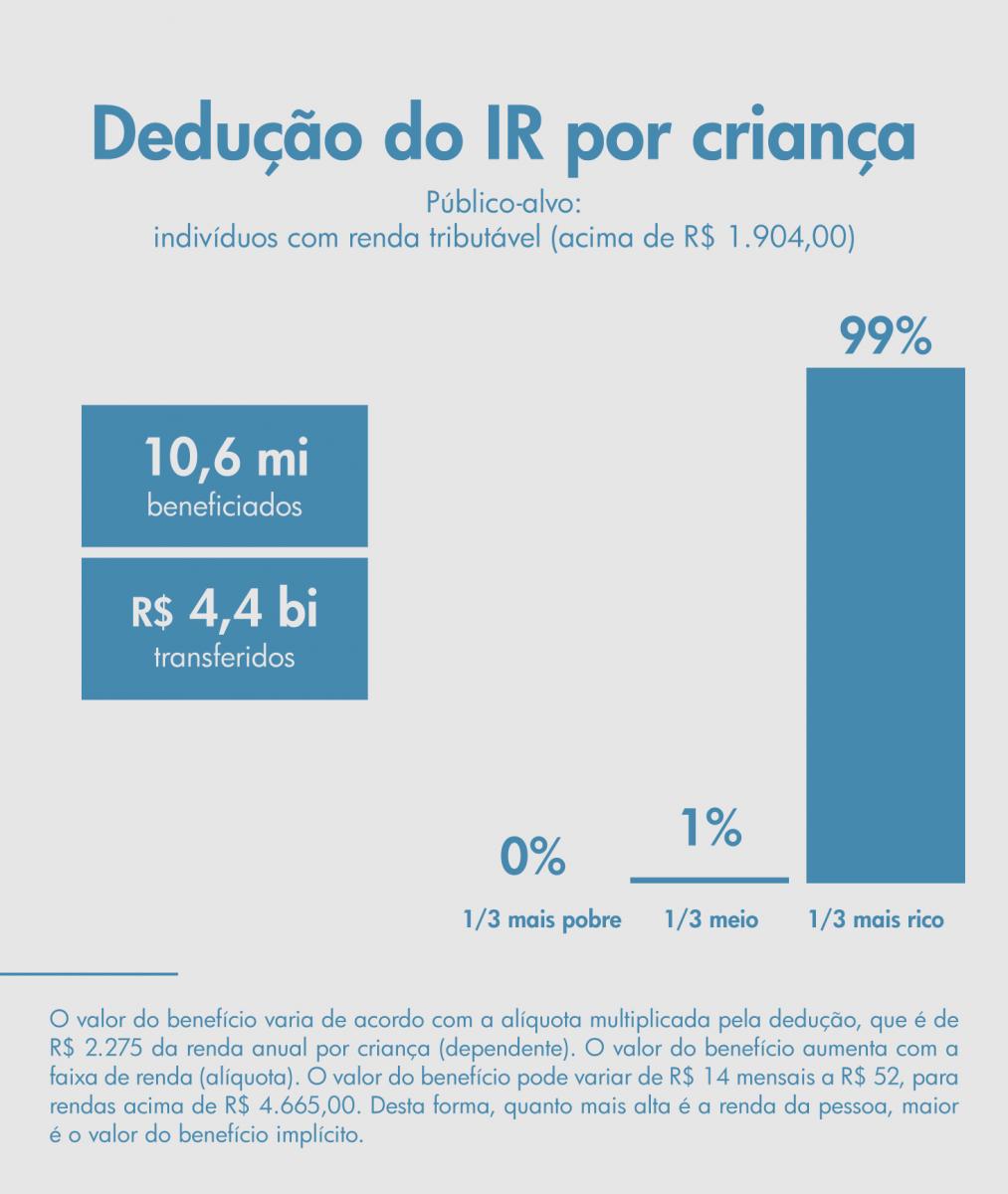 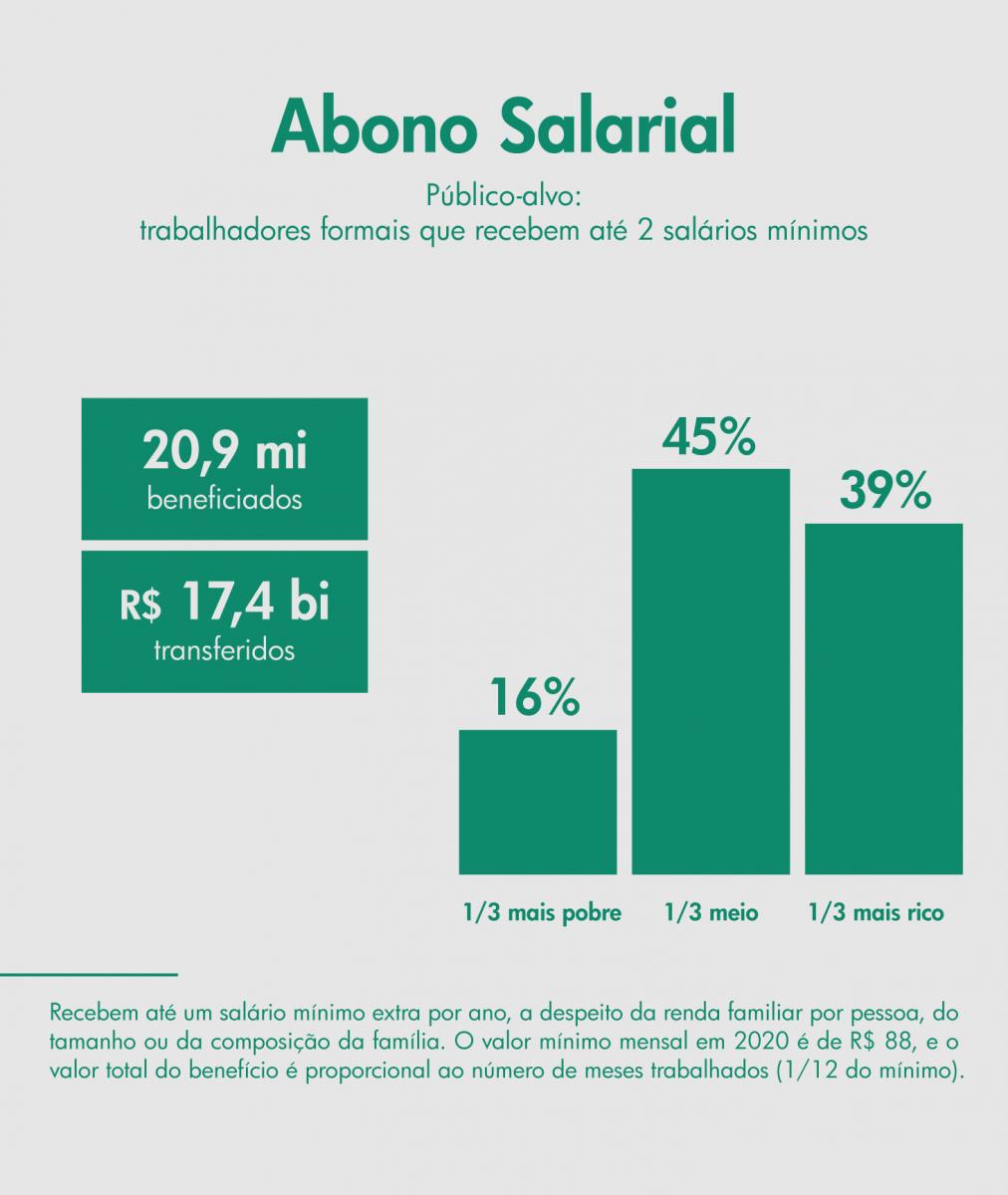 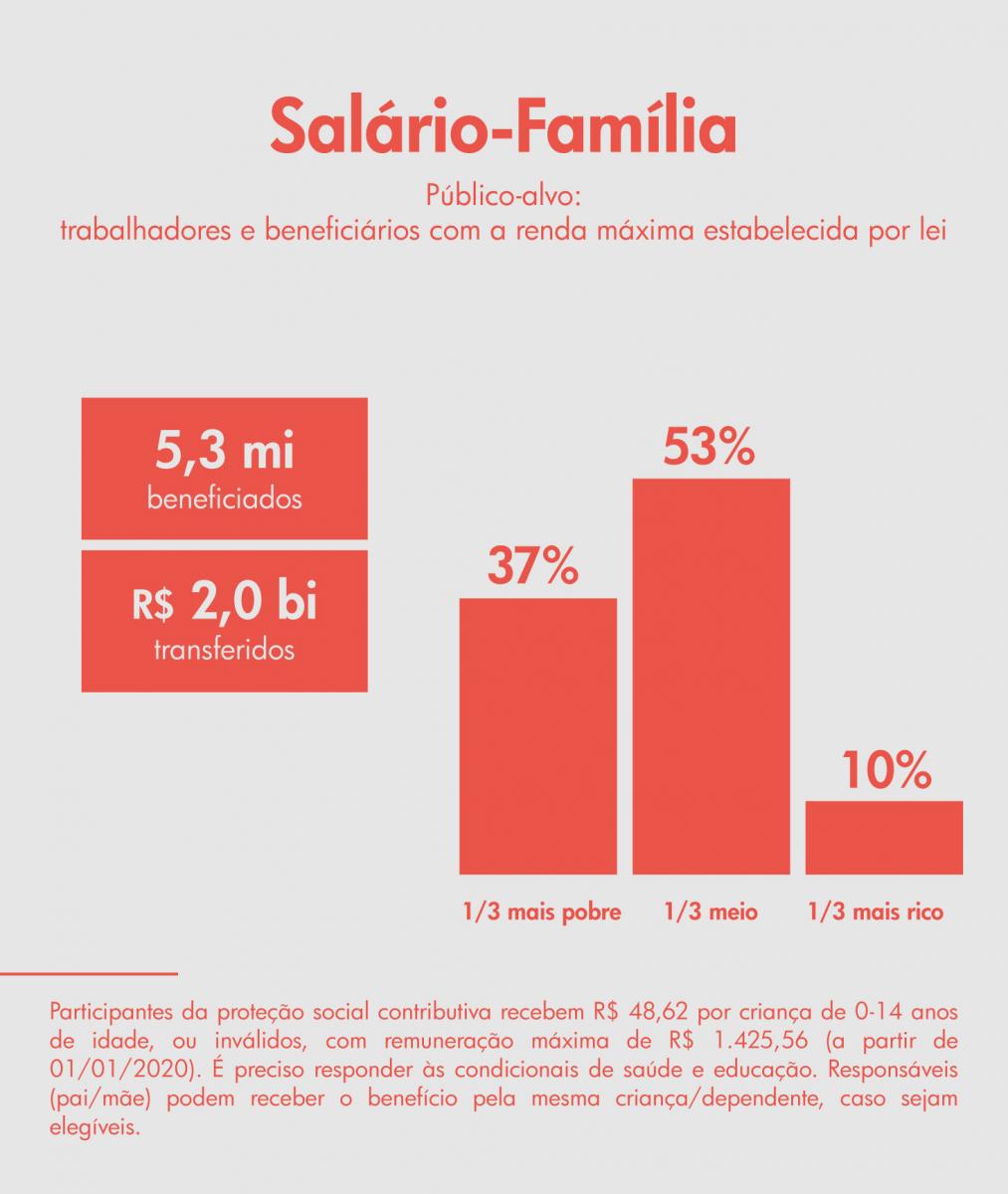 The researchers believe that it is possible to achieve better results from a distributive point of view with the same budget used today—about BRL 52 billion—by creating a system of benefits that would make use of the existing institutional infrastructure of the single registry of beneficiaries (Cadastro Único) and the programmes associated with it.

The elaboration of this new unified, universal benefit was based on criteria such as respect for fiscal and social responsibility, observing the available budget, but rejecting any possible cuts; flexibility in the face of demographic and social changes; determining need according to per-capita monthly household income; use of the Cadastro Único as a mechanism for identifying poverty; a single eligibility threshold, which would be households with a per capita income of BRL 250,00; no sudden cuts to benefits, prevented by implicit marginal tax rates that do not exceed 50 per cent; and periodic adjustments envisaged by legislation.

Based on these seven principles, the researchers reached a restructuring of the benefits, as illustrated in the infographic below. 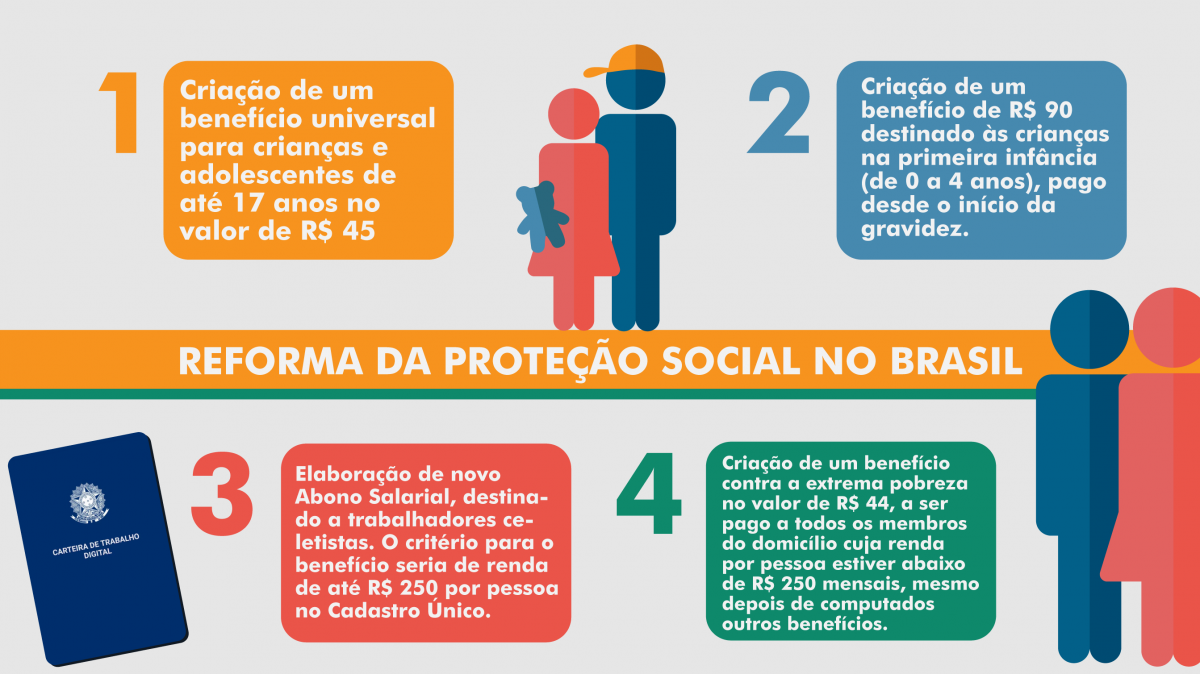 The proposal elaborated by the researchers eliminates overlaps and unifies the bulk of the transfers. That way, 72 per cent of the budget would be transferred to the poorest third of the population. In the current setup, only 44 per cent of resources end up reaching the poorest. The overhaul would make it possible—with the same budget—to reduce inequality by 2.03 Gini points against the 1.10 with the current system. Regarding the reduction of poverty, the potential results would have an even greater impact: 3.0 points against 1.5 for extreme poverty (using a BRL 115.36 line corresponding to the World Bank's USD 1.90 extreme poverty line) and 4.5 points against 2.2 for the upper poverty line (BRL 333.90, equivalent to the World Bank's USD 5.50 line).

Researchers point out that changes in legislation and careful implementation are essential to make this new social protection budget setup possible. It would be necessary to alter the Constitution, allowing the budget of these programs and the value of tax deduction per dependent to be used in the unified program, in accordance with the Constitution Amendment Proposal No. 133/2019. In addition, “there is still a long road of reflection and discussion ahead of us, which should respect the necessary transition and implementation timeframes, so that no household in a situation of poverty suffers from a decrease in the values they currently receive from Bolsa Família”, says researcher Letícia Bartholo, co-author of the study. 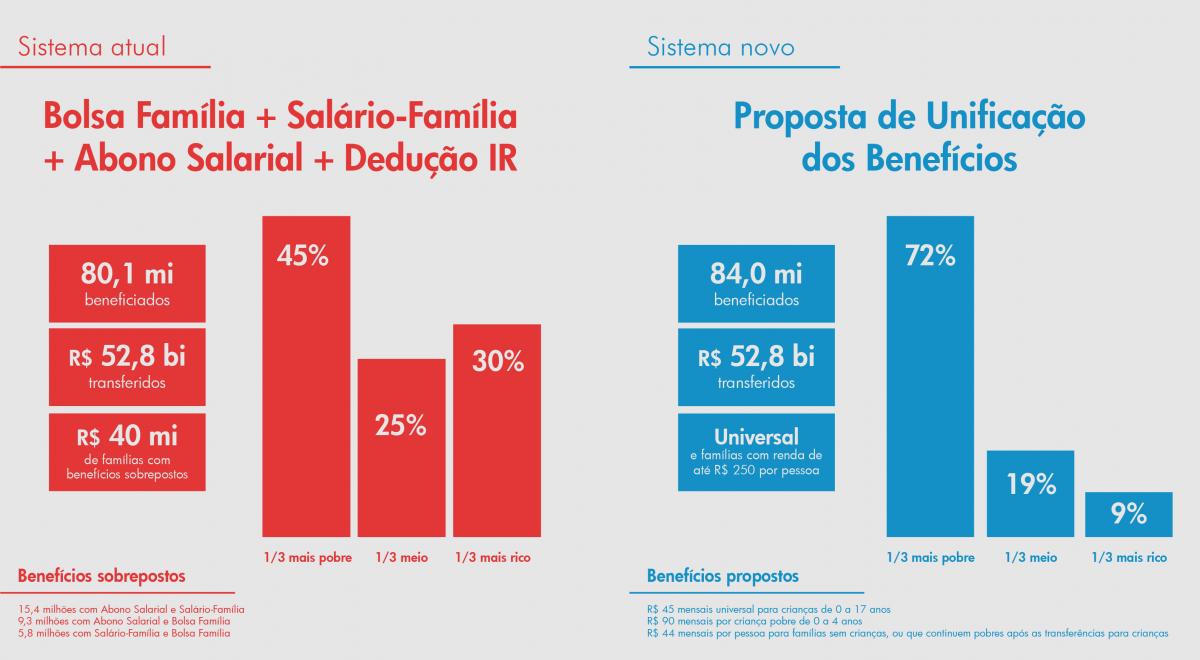 According to author Sergei Soares, for this improvement to be possible, it is crucial that “we use the right concept of income, which is not the one that is used in the Abono Salarial. Currently, for this benefit, we use the concept of individual income in the formal labour market”.

Still on the Abono, Soares points out that “our idea is to retain its current characteristics, but target the benefit to poor people or those who are vulnerable to poverty. This would be accomplished by expanding the range of eligible workers, such as domestic workers, who are hired by individuals”.

Click here to access the full study in English. A reduced version, in One Pager format, is also available in English, Portuguese, Arabic and French.